Edit
watch 01:36
We're Getting Mutants in the MCU - The Loop
Do you like this video?
Play Sound
Leo Knox 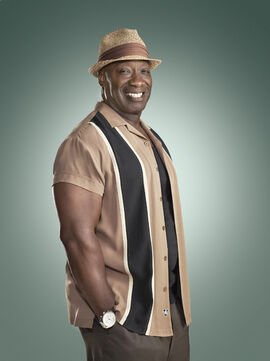 Leo Knox is Walter’s brother-in-arms – although that’s just one of his various unofficial titles. Once a lawyer who, after the deaths of his wife and daughter to E.Coli, completely reinvented himself into a gentle giant. He is a philosopher as well as Walter’s legal advisor. Leo owns The Ends of the Earth bar in Key West, Florida, which also serves as a makeshift office and home base for Walter and the eclectic characters who request their services in finding things they've lost.

Leo is an easygoing guy. He has a keen business sense and is very thoughtful and a lover of poetry.

He still feels guilty about his time in jail and he is still grieving over the loss of his daughter and wife.

Leo's wife and daughter died in an e-coli outbreak caused by tainted, frozen food. He attempted to kill Nathan Stein for their deaths, but Walter stopped him.

Leo considered having an affair with a fellow lawyer while he was married. She later uses Walter to try to start a relationship with Leo.

Leo is Walter's best friend and lawyer. They often discuss difficult philosophical issues before or after cases. Leo usually accompanies Walter on his cases; while he doesn't completely understand Walters' 'finder power', he seems the most adept of the team at explaining it to outsiders. He also seems to know what happened to Walter when he was injured. He feels like Walter saved him from himself after his daughter's death.

Leo has a lot of faith in Willa, expecting her to do the right thing and to stay out of trouble. He treats her as part of his family, while Willa is not quite sure how to relate to Leo.