Edit
watch 01:36
We're Getting Mutants in the MCU - The Loop
Do you like this video?
Play Sound
Timo Proud 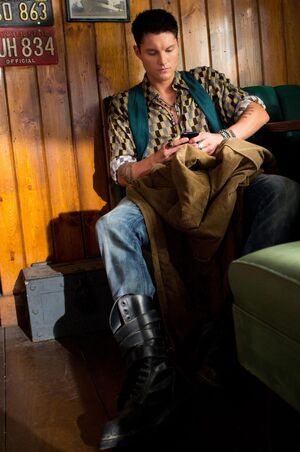 Timo Proud is a gypsy like Willa, which entails being a con-man and thief.

Timo is shown to be tense and worried, and always in need for money. While he is often sarcastic, he can also be charming and funny.

He relies on Willa for ideas and help to come up with the money they need, but he's not stupid. Like Willa, he uses the chances that Leo and Walter offer to use his skills to help people, which shows he's actually a good person.

There is not much known about the Romani family. The current leader is Uncle Shadrack, and his word is the law. Timo is also afraid of defying him.

Like all gypsies, he refers to others of his clan as uncle, cousin, etc. although there is not necessarily a blood connection.

Timo is wrongly engaged to his "cousin" and best friend Willa, although he is in love with another gypsy girl named Magdalena who is betrothed to someone else.

In Season 1, Timo and Willa are constantly trying to make money for Uncle Shadrack in order to buy themselves out of their engagement.

Timo's "cousin", meaning she is also part of the Romani gypsy clan. They are engaged per Uncle Shadrack's order, but only have a brother-sister love for each other. They are best friend's and each others confidant.

Timo does not approve Uncle Shadrack's decision to engage him to Willa. However, he does not openly rebel with actions, because he either respects or fears him.

He once did a bell-tuning scam with his "cousin."

A gypsy girl he is in love with, but can't marry.