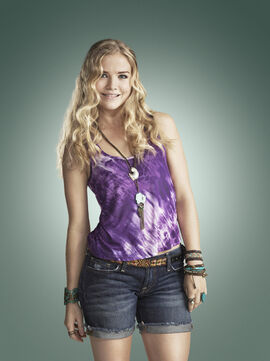 Willa Monday is a Romani gypsy, a reforming criminal currently on probation under Leo's protection, working at The Ends of the Earth bar where Leo and Walter on occasion use her various hard-gained skills in their own work efforts.

Willa is a headstrong and independent character, bred and raised to be a criminal by her extended gypsy family. She's brave, sarcastic, brazen, and sometimes downright mean. She's also very smart, as she has a knack for technology and pickpocketing, and gets Walter's way of thinking to a point. She also has a knack for getting herself into trouble as well.

She’s confused in Leo’s faith in her and tries to get used to Walter and Leo apparently wanting nothing more from her than to set her on the straight-and-narrow. Seeing as she lets them more and more, shows she has a very good heart and wants to be a better person.

There is not much known about Willa's family, aside from the fact that they are gypsies. The current leader of the family is Uncle Shadrack, and his word is the law.

Like all gypsies, she refers to others of her clan as uncle, cousin, etc. although there is not necessarily a blood connection.

Willa was wrongly engaged to her "cousin" and best friend Timo.

In An Orphan Walks Into a Bar,

Willa's "cousin", meaning he is also part of the Romani gypsy clan. They are engaged per Uncle Shadrack's order and Willa loves Timo, but he is in love with another girl. They are best friend's and each others confidant.

Willa dispises her gypsy family leader for engaging her to Timo against both their wishes. However, she rarely engages in truly 'rebellious' behavior, as she respect and/or fears Timo.

Leo is very concerned for Willa, trying to keep her on the right side of the law, but also covering for little missteps and singing her praise whenever Willa's probation officer comes around. It is suspected that Willa reminds him of his late daughter Ellie.

She's Willa's strict probation officer. They are usually at each other's throats, but after they spend time on a case together in Eye of the Storm, they also acquire a certain respect for each other's skills and personalities.

Retrieved from "https://thefinder.fandom.com/wiki/Willa_Monday?oldid=4302"
Community content is available under CC-BY-SA unless otherwise noted.